What's up baby - so this is part four of our seven part series which walks you through creating your own Security+ hacking lab (so you can pass the test with confidence).

We've already covered how to setup VMWare Workstation and how to download and install Kali Linux.  Now I'm going to show you how to personalize Kali Linux which will make it way more fun to use.

We are midway through our training session on configuring our hacking lab for the Security+ exam.

We are going to do five things in this training lesson:

We've got a lot to cover so let's not waste anytime!

The first thing we need to do is to use the generalized timing formula tool, more commonly known as the gtf tool.

Now we need to copy everything after the Modeline" value and feed it into the xrandr package. 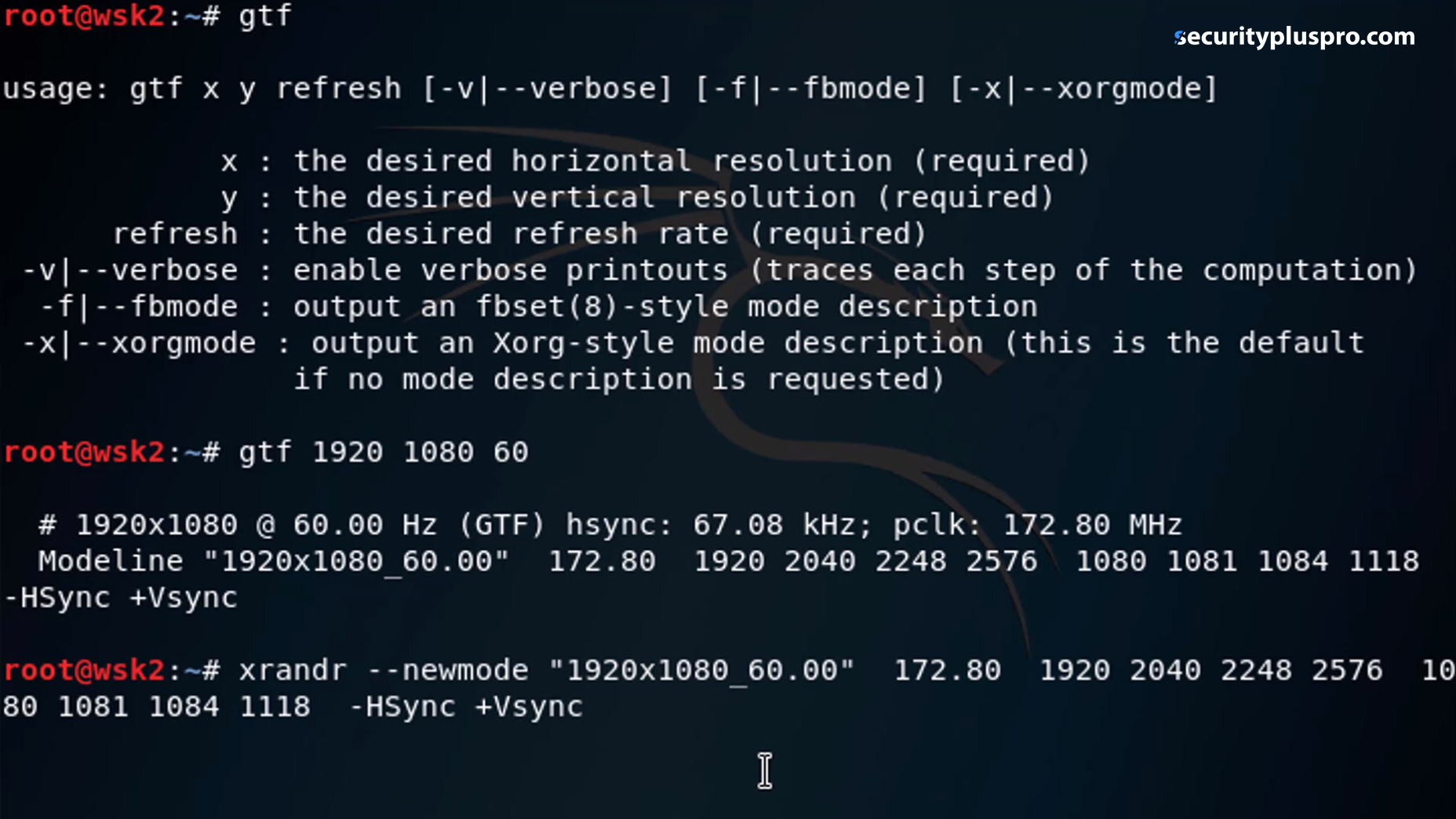 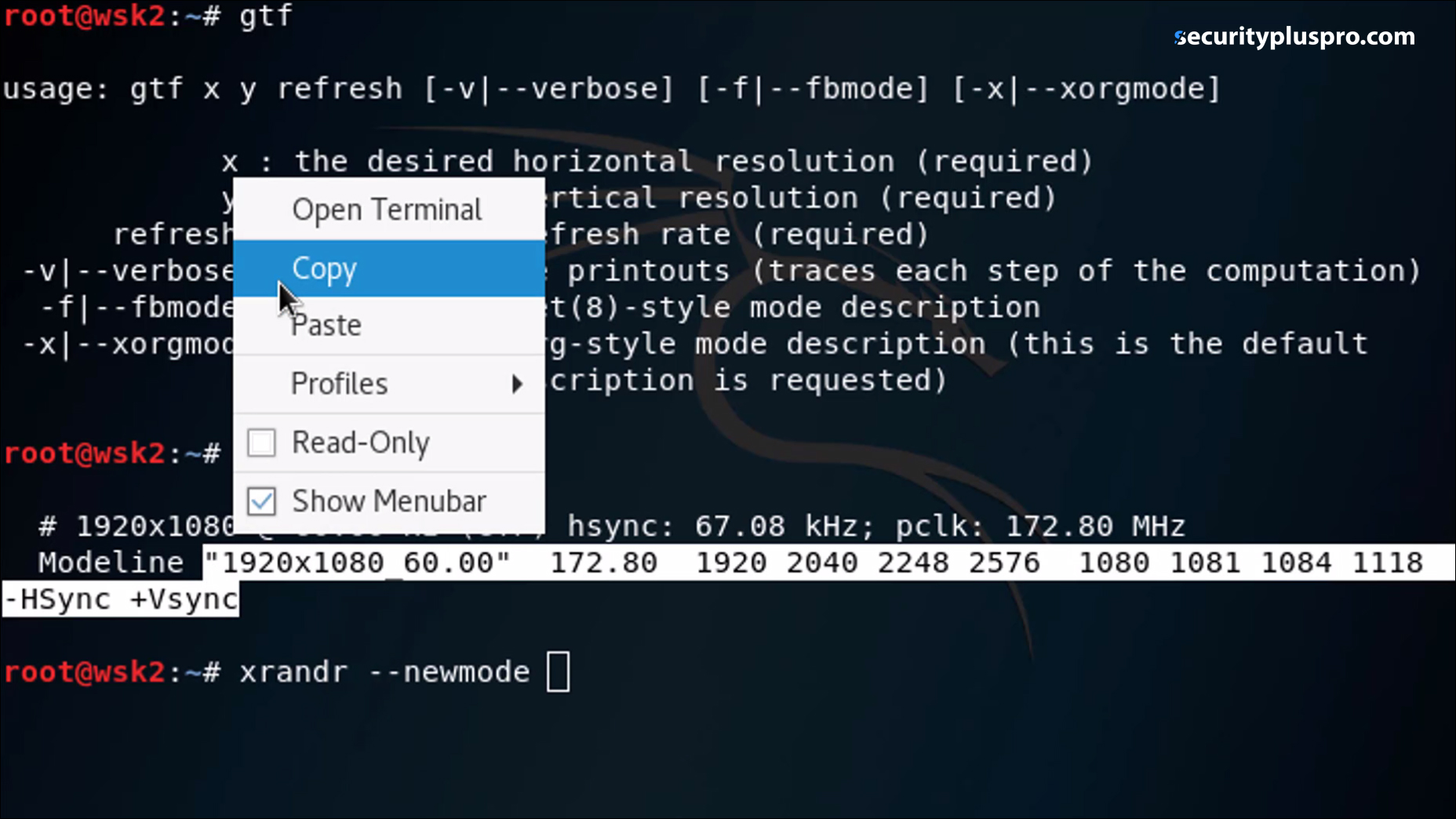 Now, your values may look different.  The point here is that the xrandr --newmode attribute contains the text result after Modeline.

Awesome, next we'll add the mode by typing the following command:

And finally we'll set the output:

This should instantly change your screen resolution in VMWare Workstation to 1920x1080. 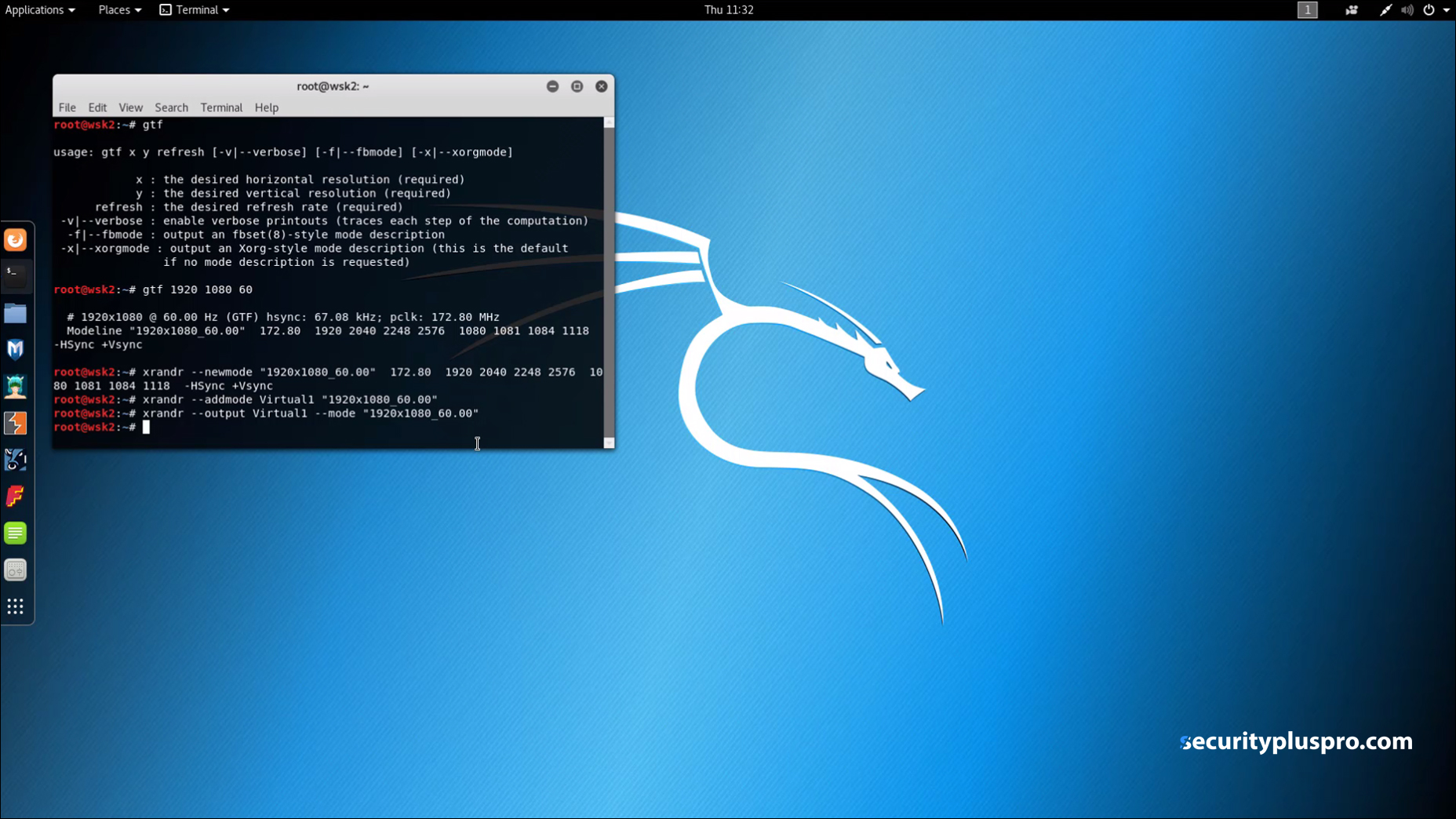 So let's change into the /etc/init.d directory, create a file and fill it out.

This will open the vi text editor. Hit the "i" key to enter insert mode (so we can type stuff) and then
just copy and paste all that xrandr magic we typed earlier. 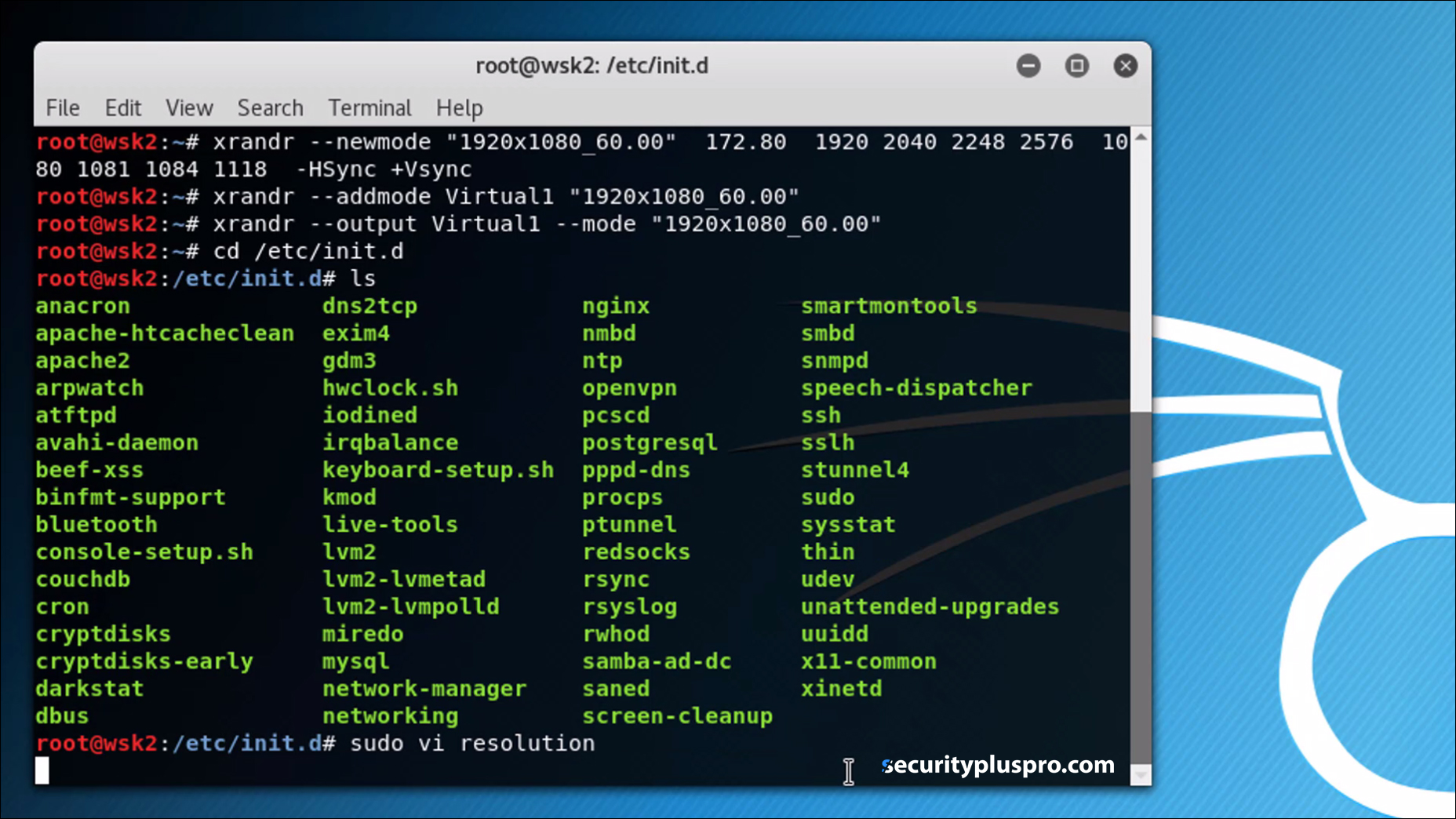 We'll start with the shebang prefix.

It's always a good idea to tell Linux the command interpreter to use whenever we build a script.
That's basically what we're doing here.

The "#!/bin/bash" line tells Linux that this file should be interpreted according to the rules of the BASH interpreter (which is the default shell for Linux). 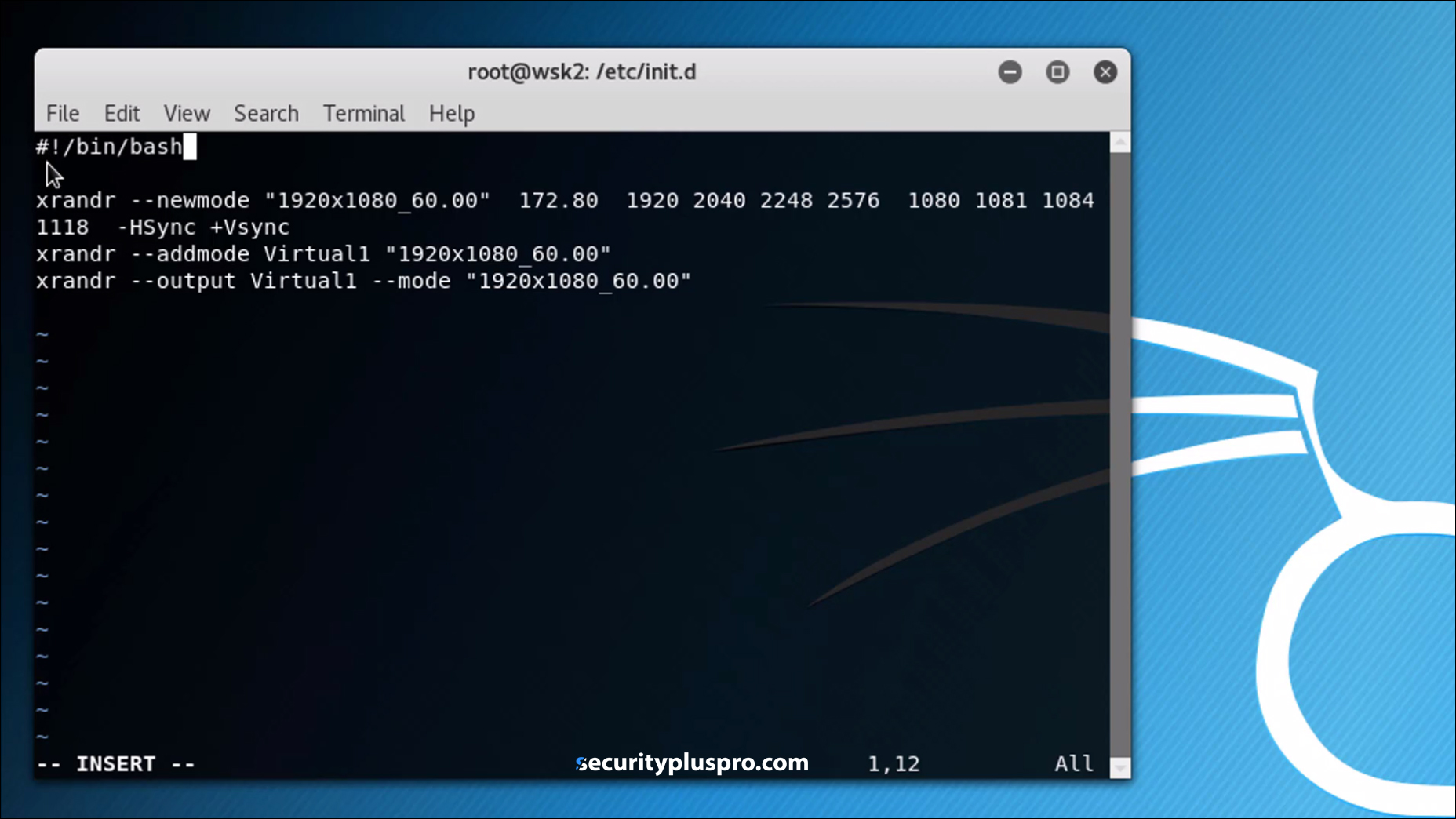 Okay, so far so good. Press Esc to exit and then hit Shift ZZ to save the file. Now we need to make the
file executable by typing:

Good.  Now we need to type cd to go to the home direcotry and then enter the .config folder.

And we'll make a directory named autostart and change into that directory.

Press "i" to enter insert mode and type this in: 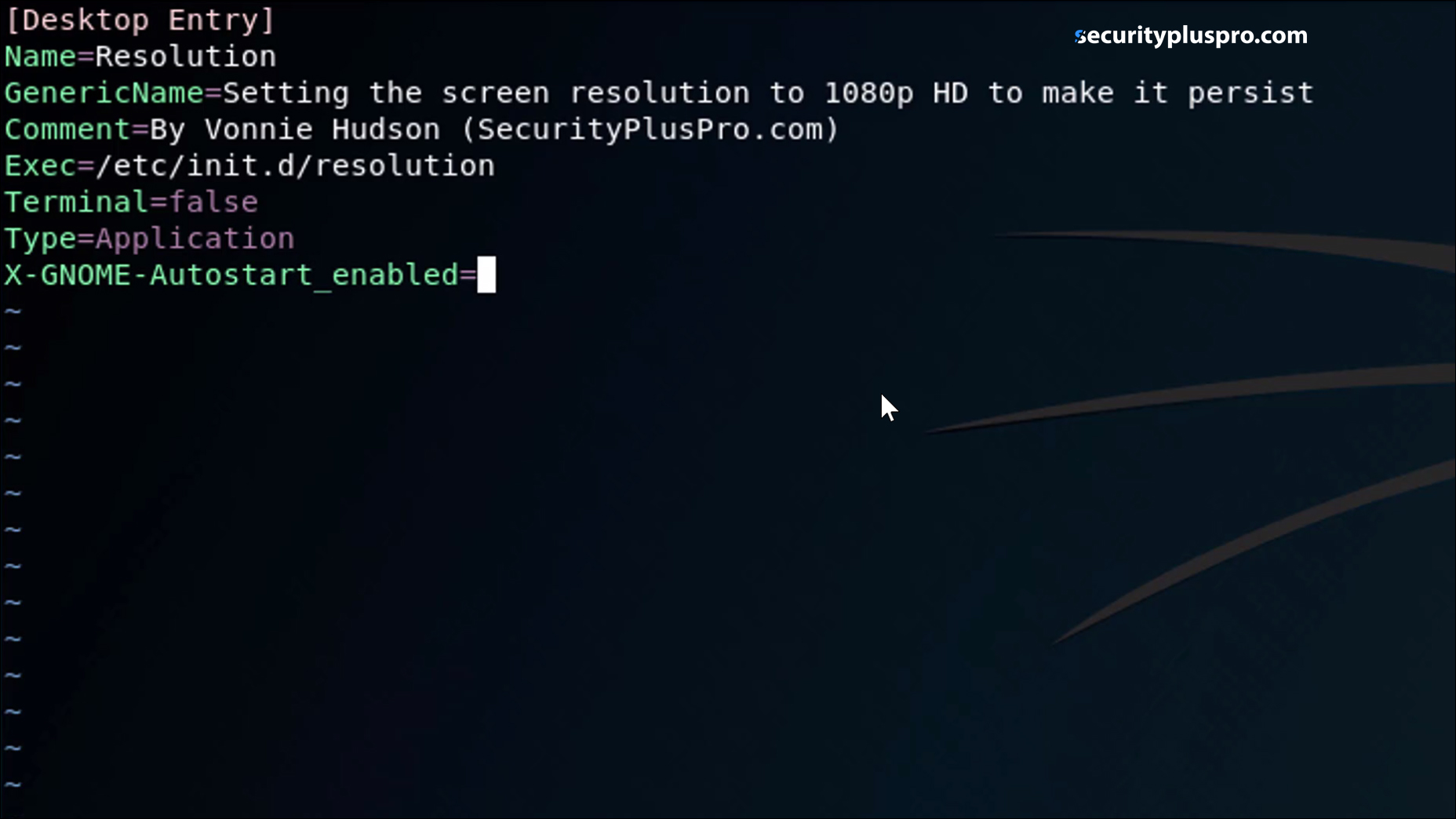 Great. Press Esc, hit Shift ZZ to save it and then type reboot to reboot.

That should do the trick for you.  If it doesn't just leave a comment below and we'll figure it out together.  The most common mistake is a typo or not changing the file attributions of /etc/init.d/resolution to the execute bit.

Setting the Time in Kali

Great, the next thing we should do is to set the time in the 12 hour format (from the 24 hour format).  In the upper right corner of the screen, click the little power button and then hit the little wrench and screwdriver icon to open your settings. 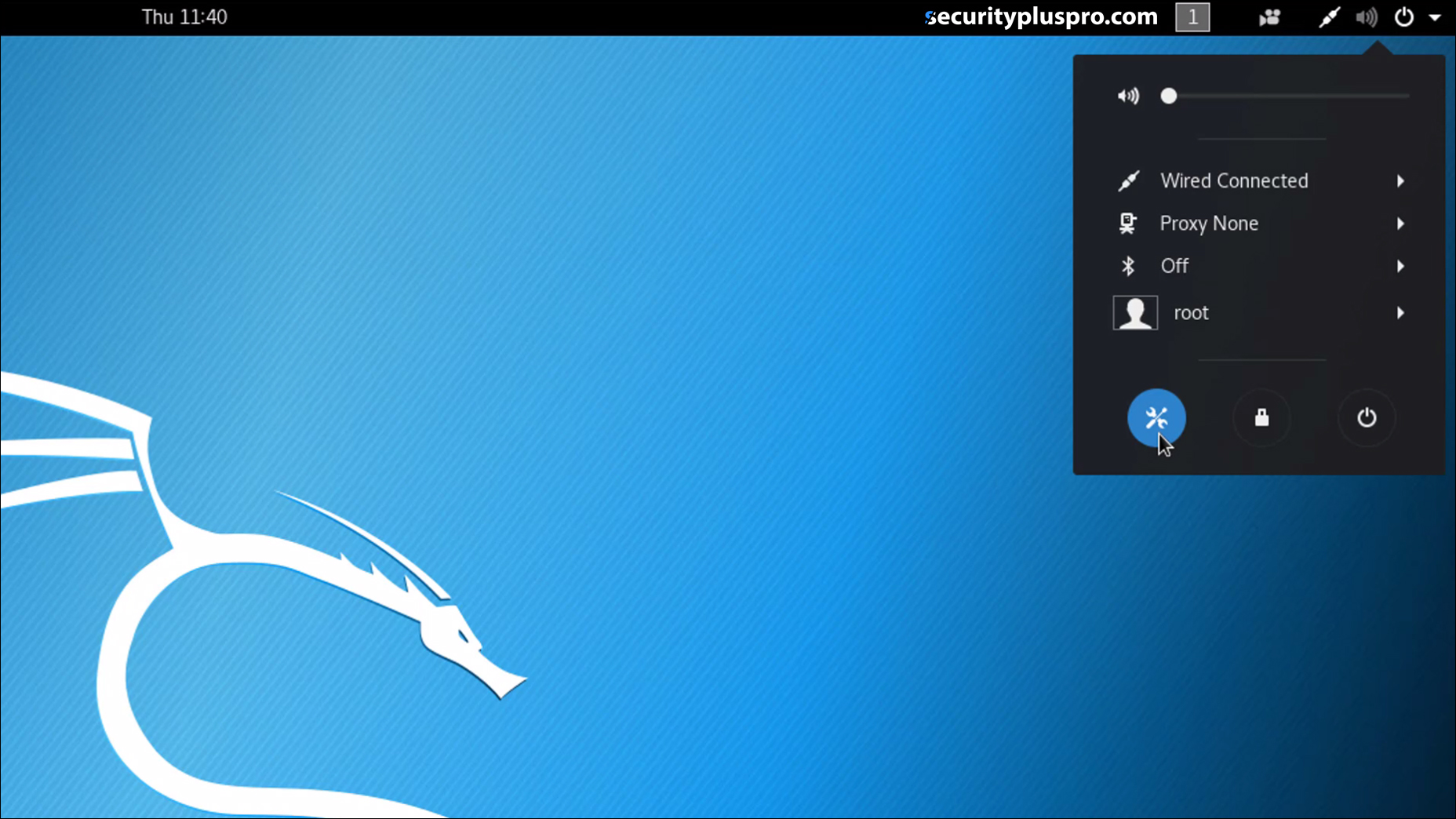 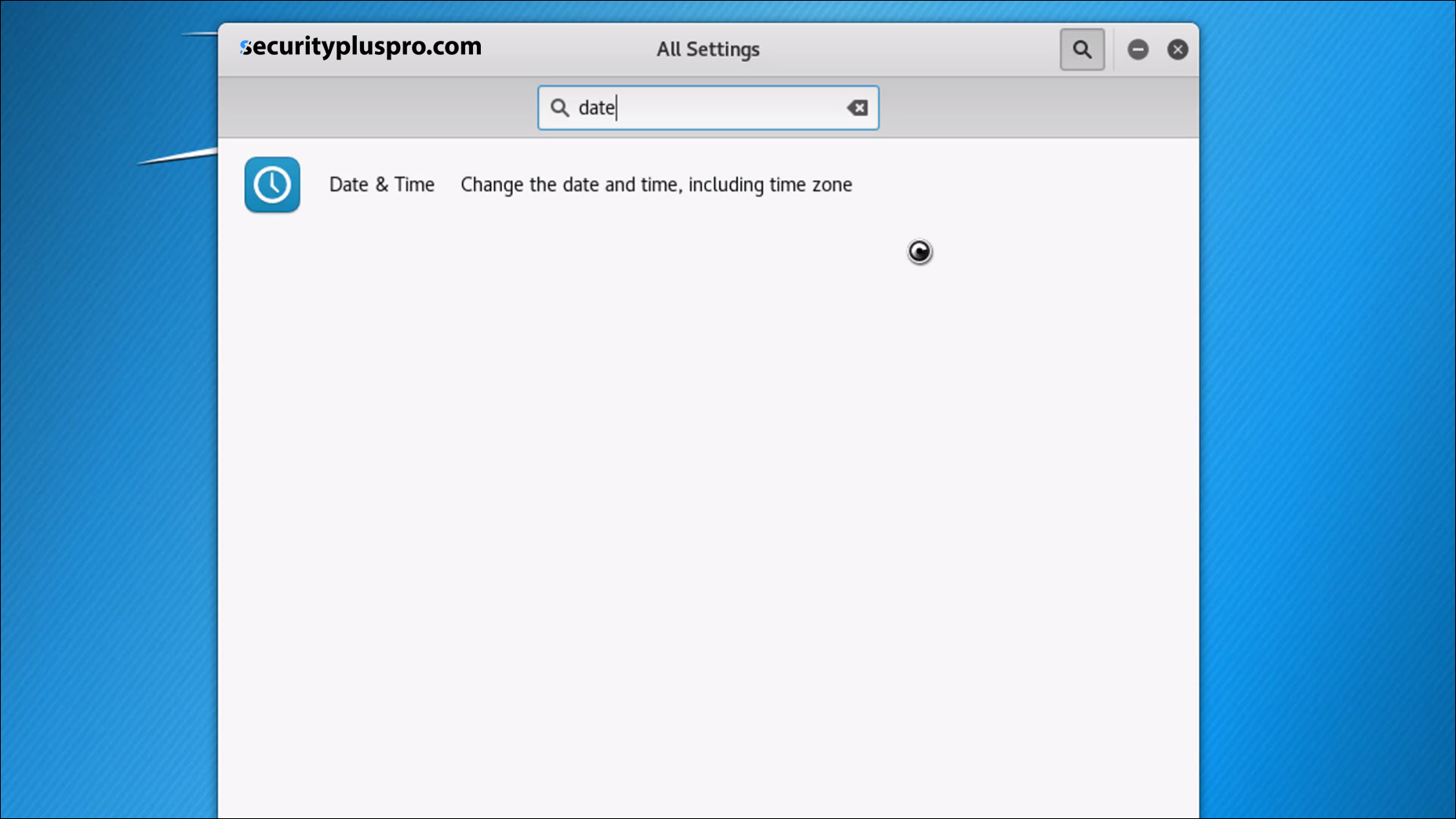 And make sure the clock is in AM/PM. 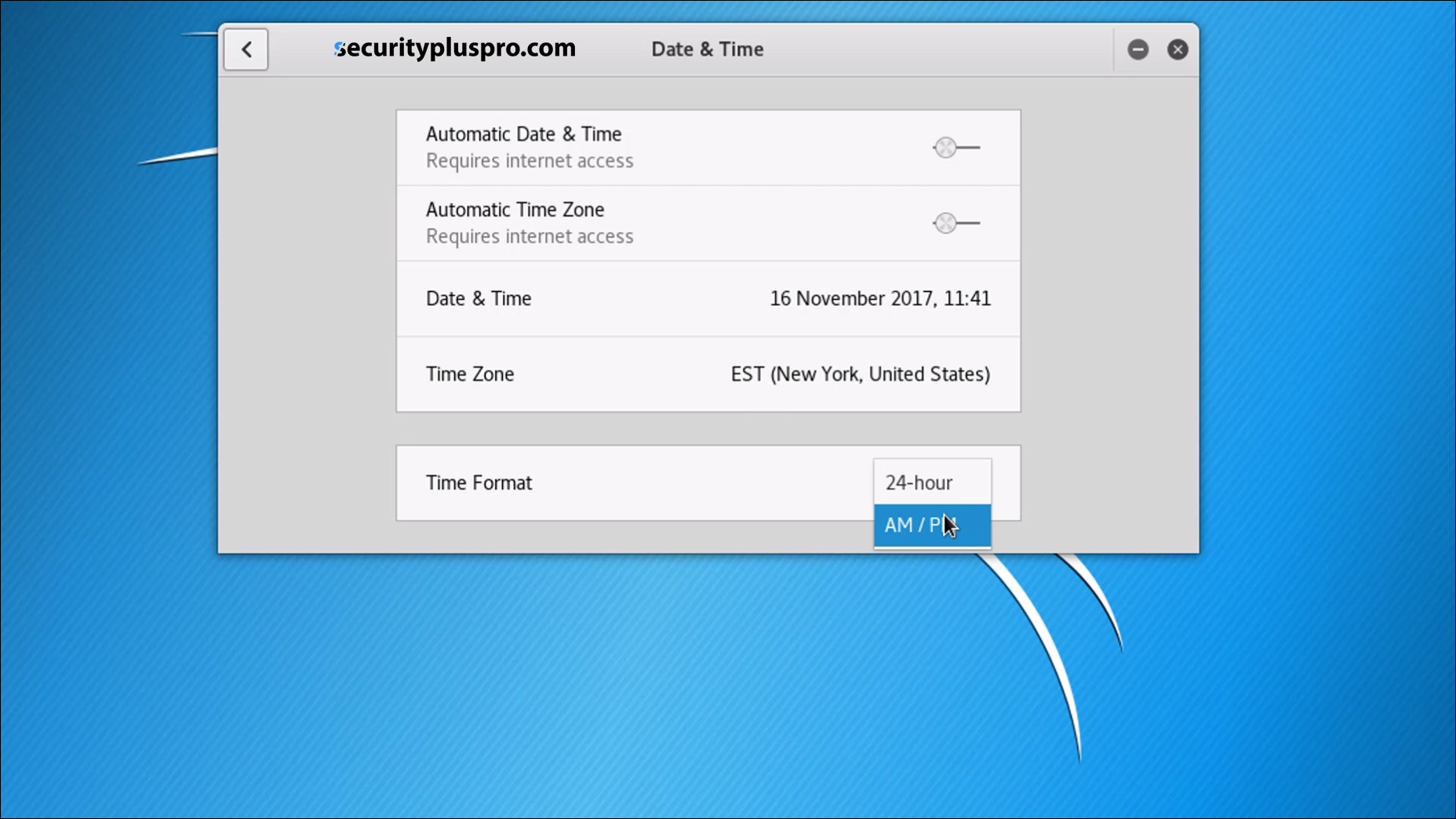 So we're going to be doing a lot of hacking from our Kali Linux machine; therefore, it should look like a hacking workstation.  That's why I like to change the theme to the dark theme.

Let me show you how to do this really quick. 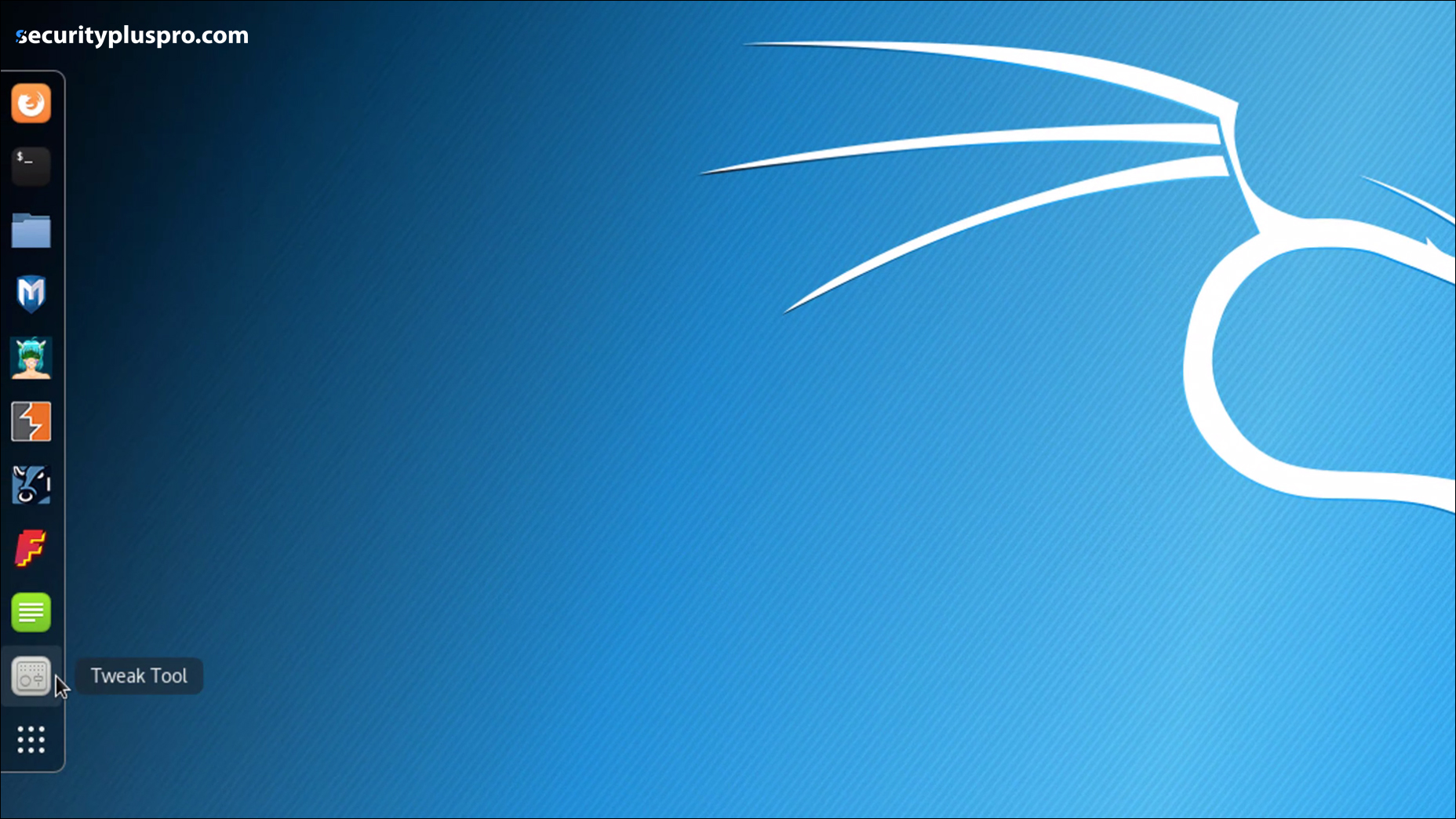 Change it to "Adwaita-dark" and smile because you're system is starting to look really cool hehehe.

Also, make sure you set the "Global Dark Theme" to "On" so all apps are updated with the new theme. 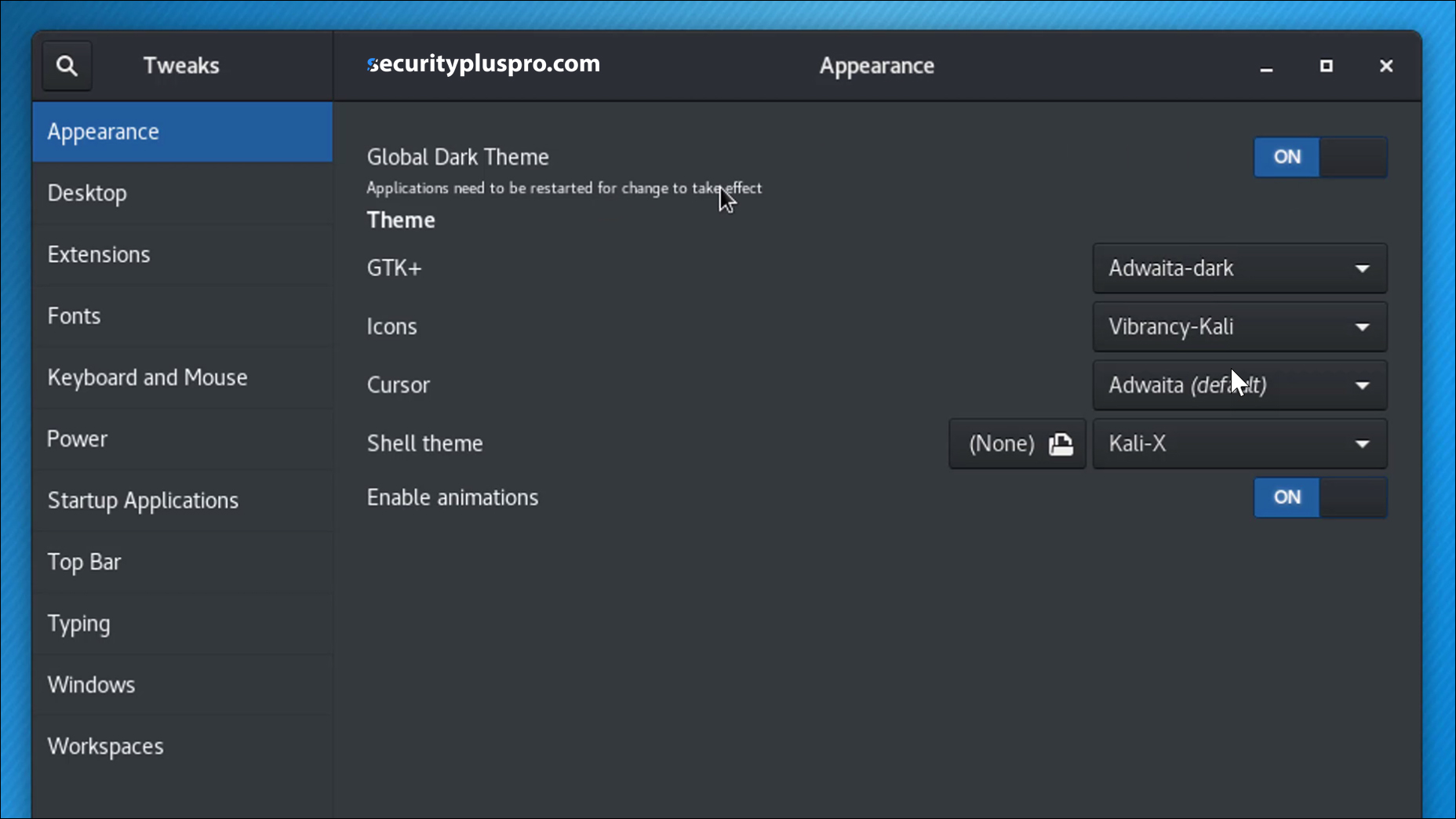 Finally, the last personalization step is make sure new terminal windows open as tabs.  It just makes it really easy to switch between all the terminals you'll have open during your hacking.  To open the terminal, click the little command prompt looking icon under the orange Firefox icon along the left side of the screen.

Now go to File > Preferences and under "Open new terminals in:" change it to "Tab". 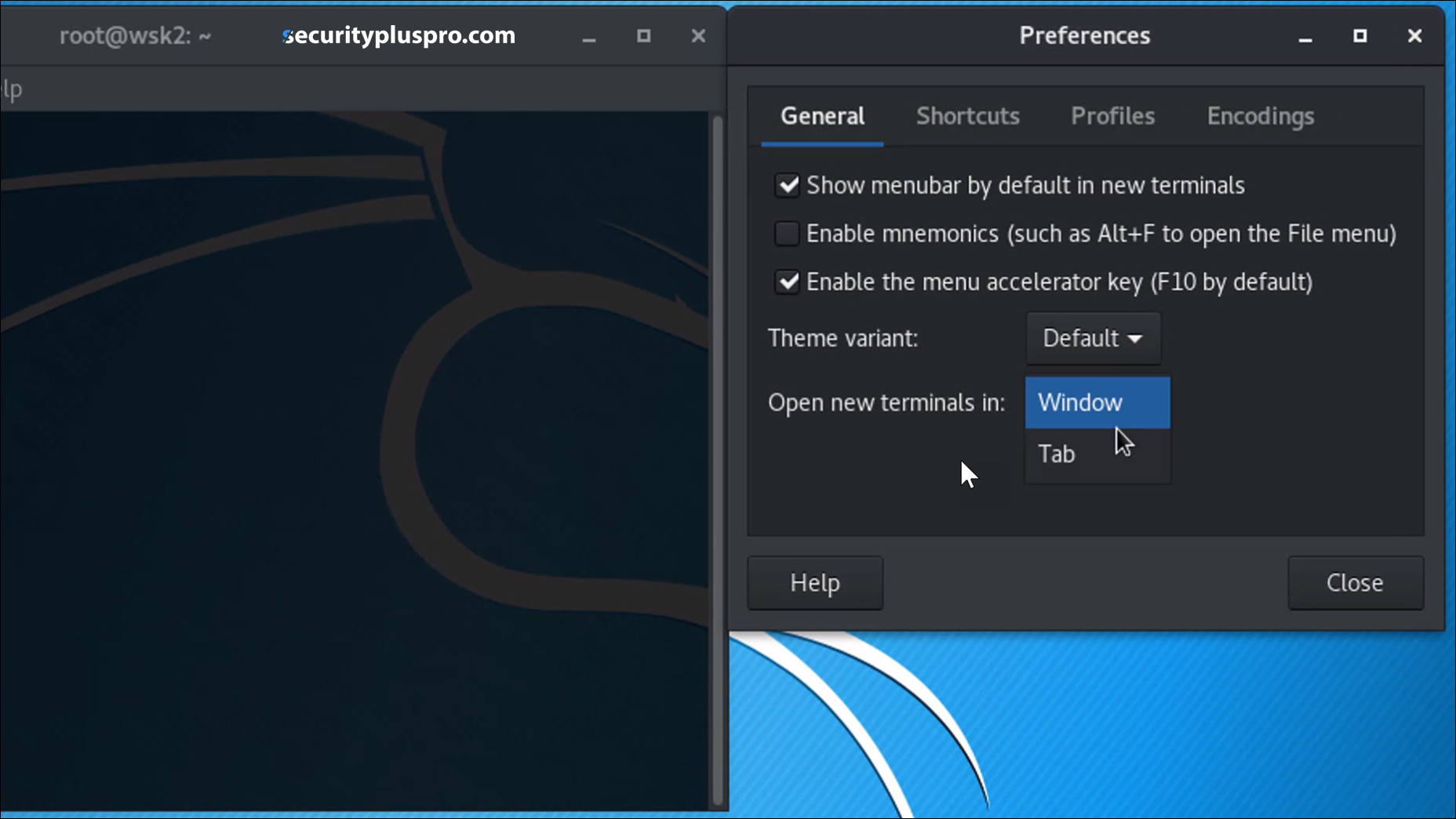 Close it out and you're good there.

We should also update Kali Linux before we get started with our Security+ studies.

The magic command is:

This pulls down the "table of contents" of files available to download then we type:

This upgrades all the software in Kali Linux.  It'll take a long time and there are a few settings you'll need to confirm before the upgrade finishes so you can't exactly take a nap yet.

For a more detailed explanation of these steps check out my video walkthrough below.  You can find more videos like this on our SecurityPlusPro Youtube Channel.

We're almost done with our lab setup here!  I'll see you next week.