Last week we looked into how to open the Windows Command Prompt, how to launch it as an administrator and then we dove into some pretty neat tricks with PING and ARP.

If you missed that training session check it out here:

Today we're going to round out our series with:

Alright, let's get into it.

Everyone knows what ipconfig is right? I think it was the first command I ever learned.

Let's open PowerShell and give it a whirl.

To open PowerShell in Windows 10 just hit the Windows Key and type:

The neat thing about Powershell is that all the normal Windows commands run just fine as well as the super leet Cmdlets which I'll share with you in a future lesson.

So let's type in ipconfig.  Type:

Look at the output: 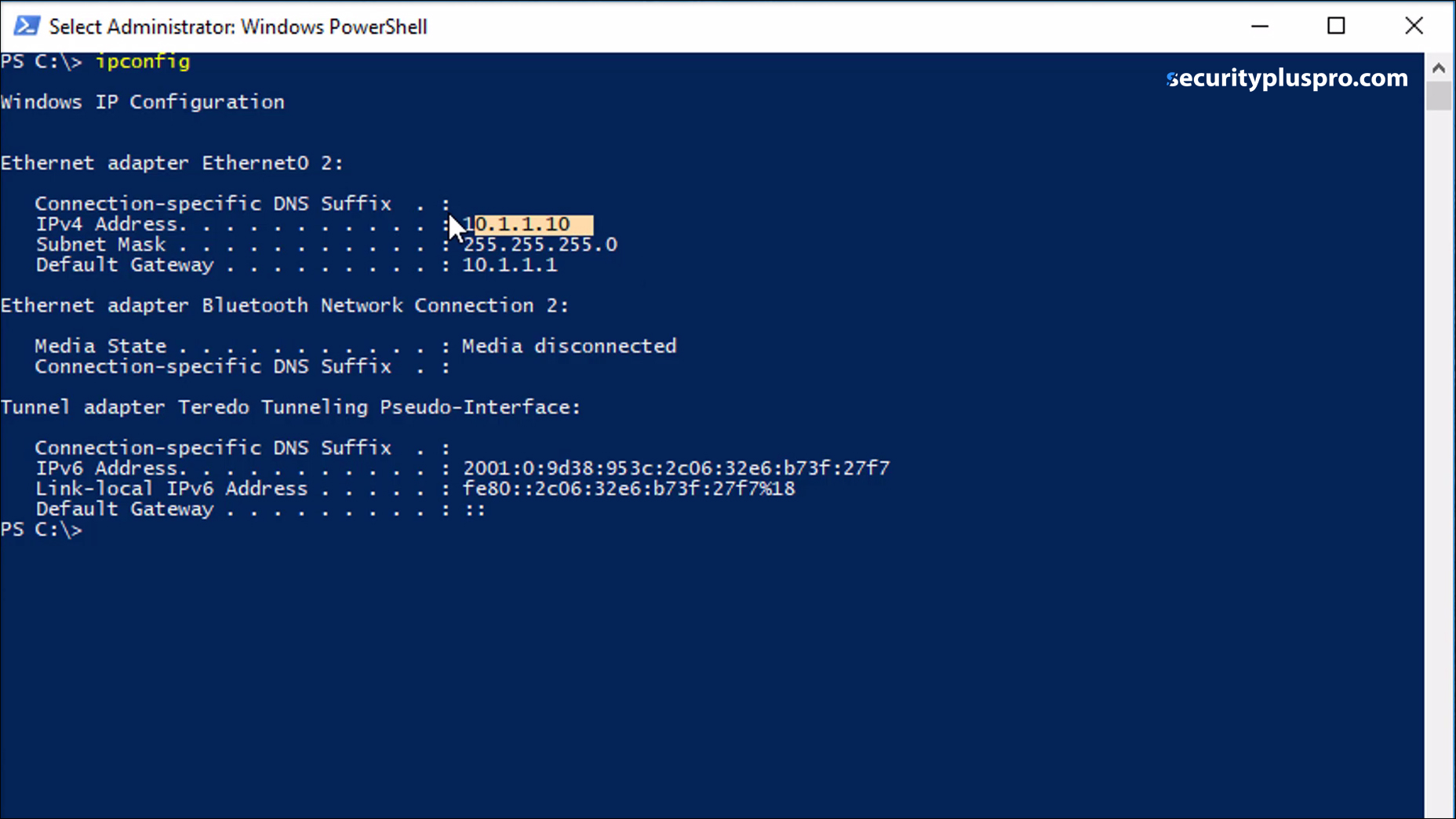 Don't worry if you're not sure what a subnet mask is or the default gateway. I promise you we will dig into all that in detail later.  For now I just want you to see that the output of ipconfig is identical to the output you see in your Network Connection Details.

For example, if you right click the little network connection icon in the bottom right corner of the screen and click "Open Network & Internet Settings" you can find your Wireless Adapter there. 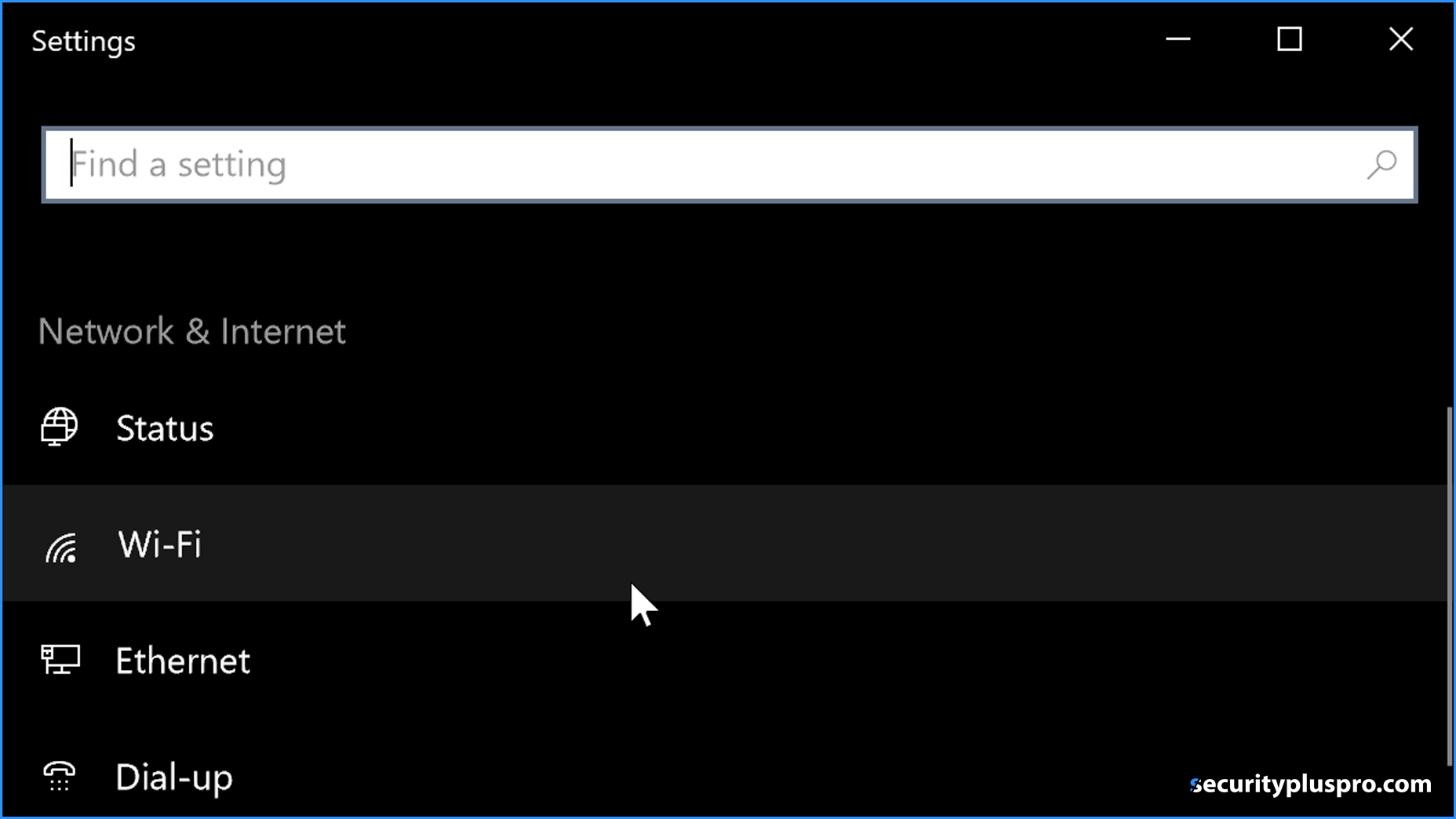 I pick Wi-Fi, since I'm connected to Wi-Fi right now. 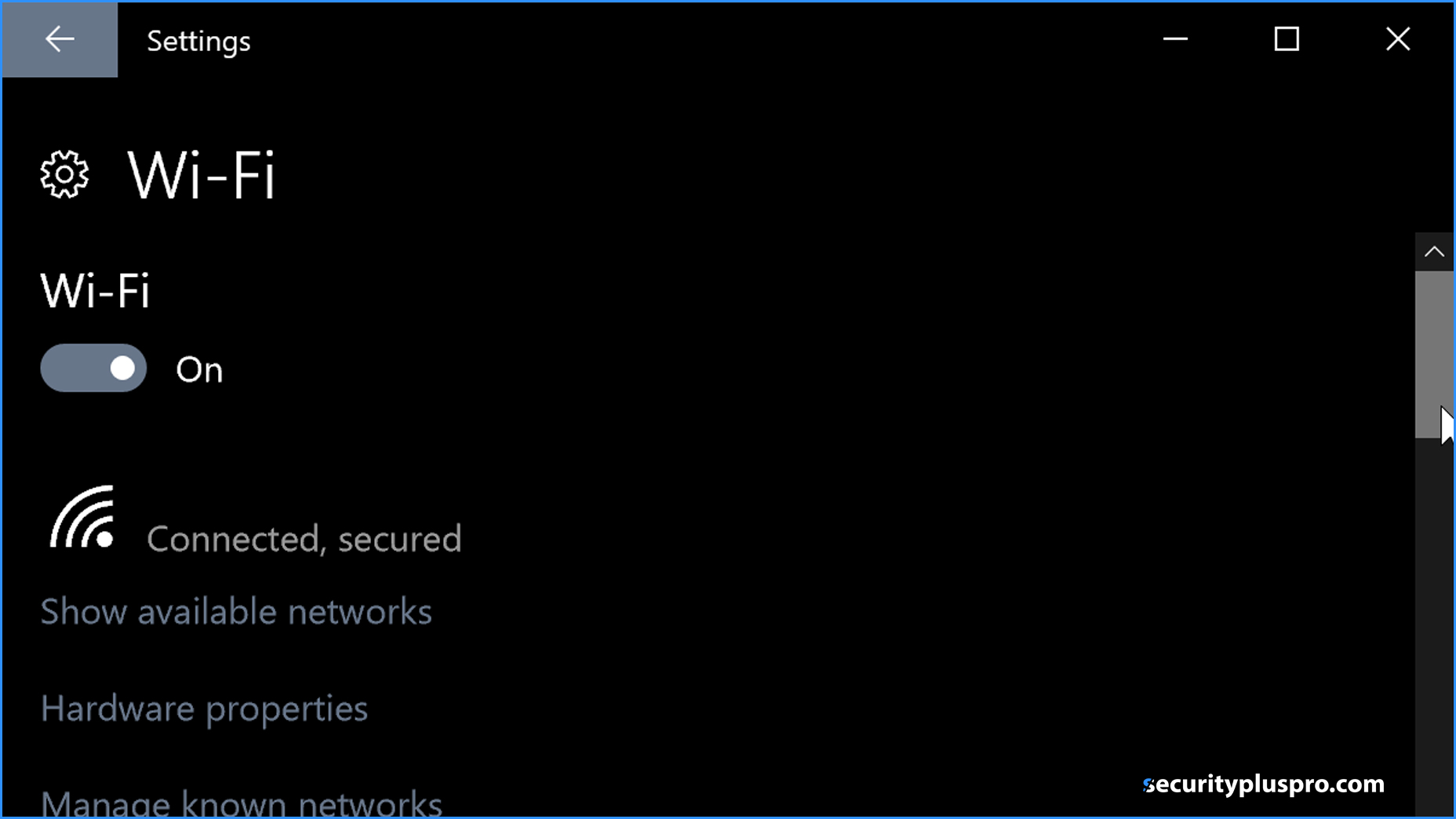 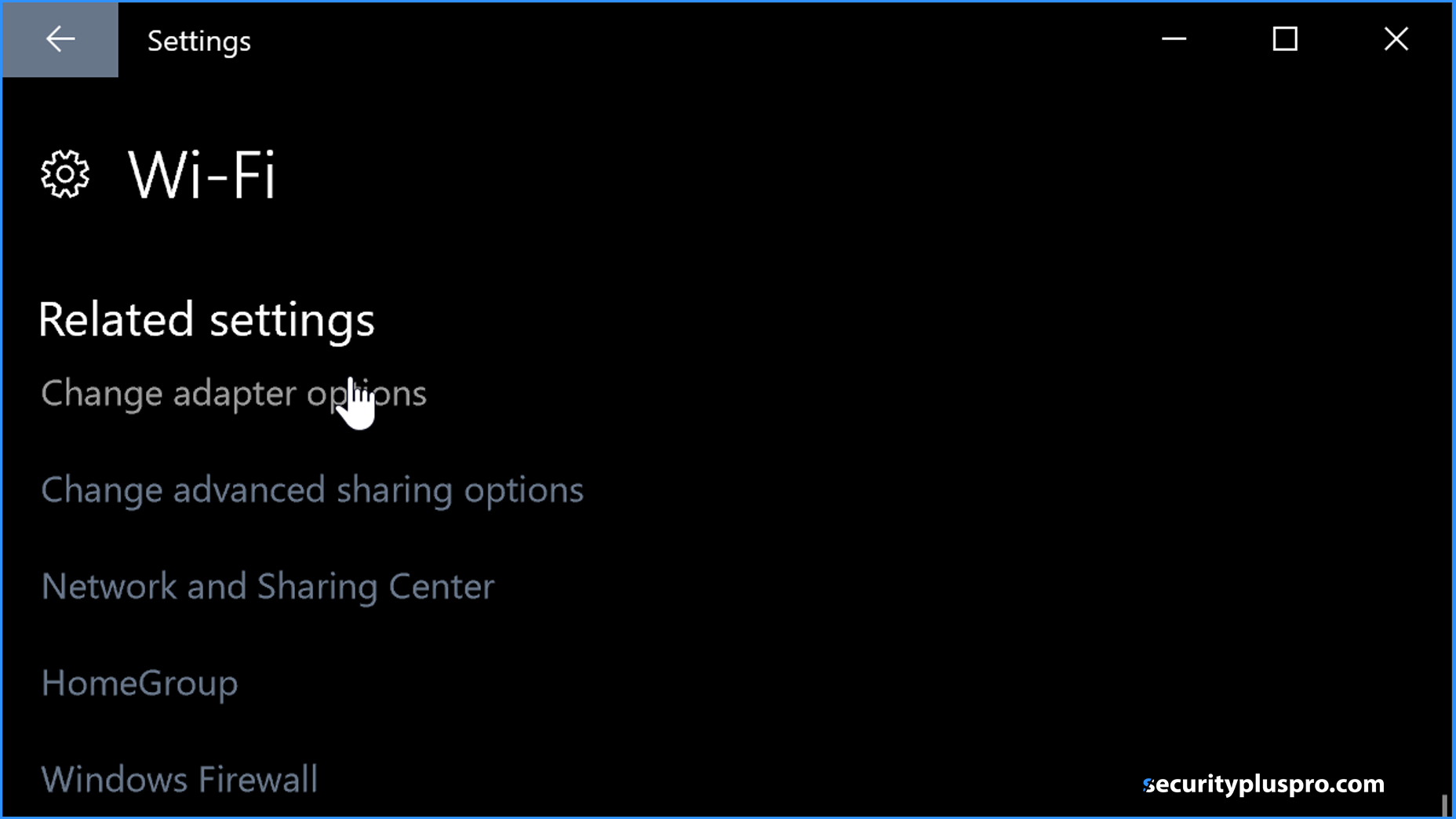 When you click that you'll see your Wireless Adapter show up in Windows.  Now all you need to do is right-click that, go to Status and choose the "Details" button to see your IP address and all that other stuff we saw with ipconfig. 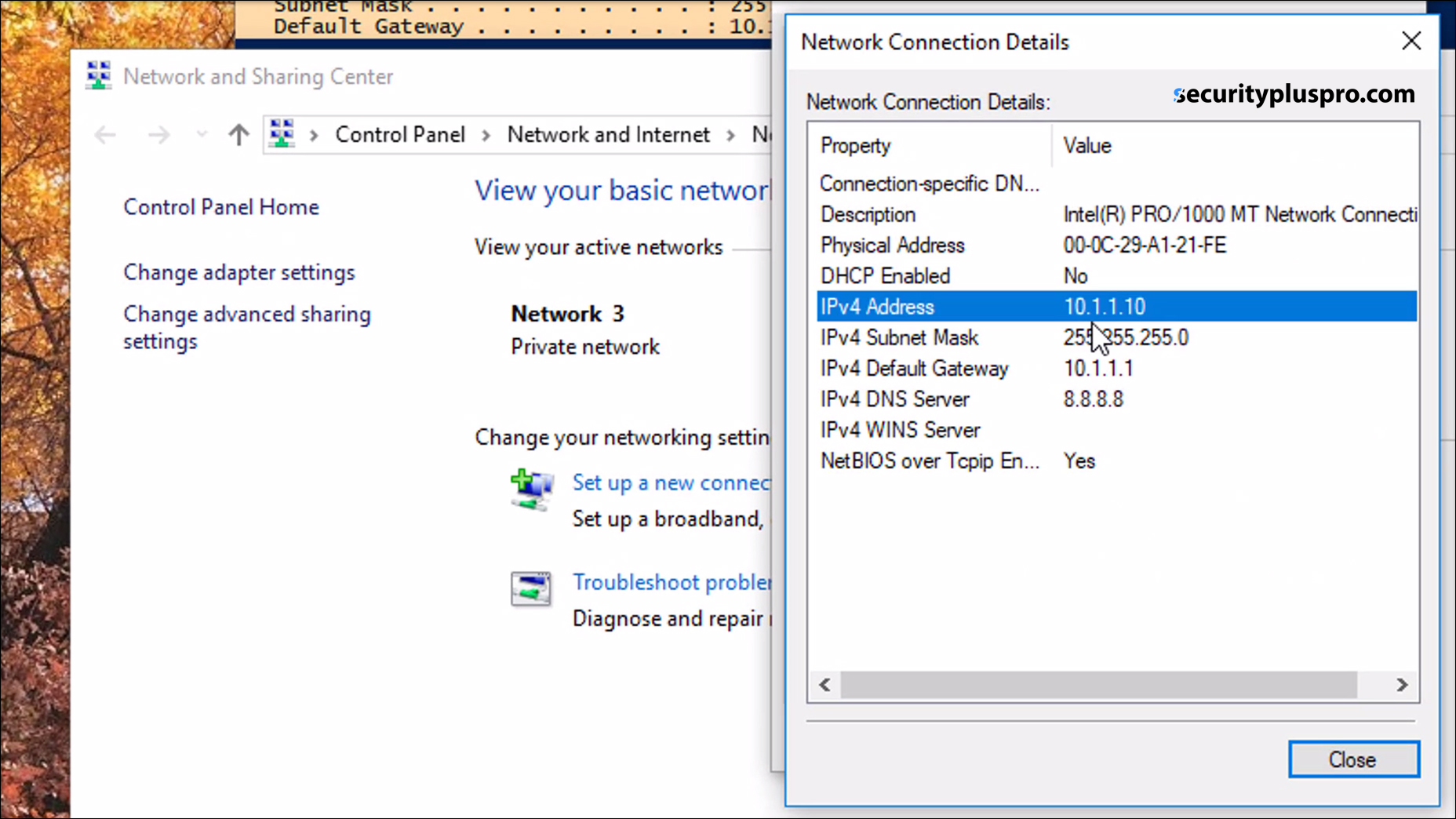 If we want to see more information we can use the mighty /all switch like this:

Now we can see the hostname, the domain my computer is joined to, as well as my network interface card name, MAC Address (that's the Physical Address shown below) and even my DNS Server.  I'm using 8.8.8.8 which is Google's free DNS server. (We'll talk about how DNS works and all that jazz in a future training) 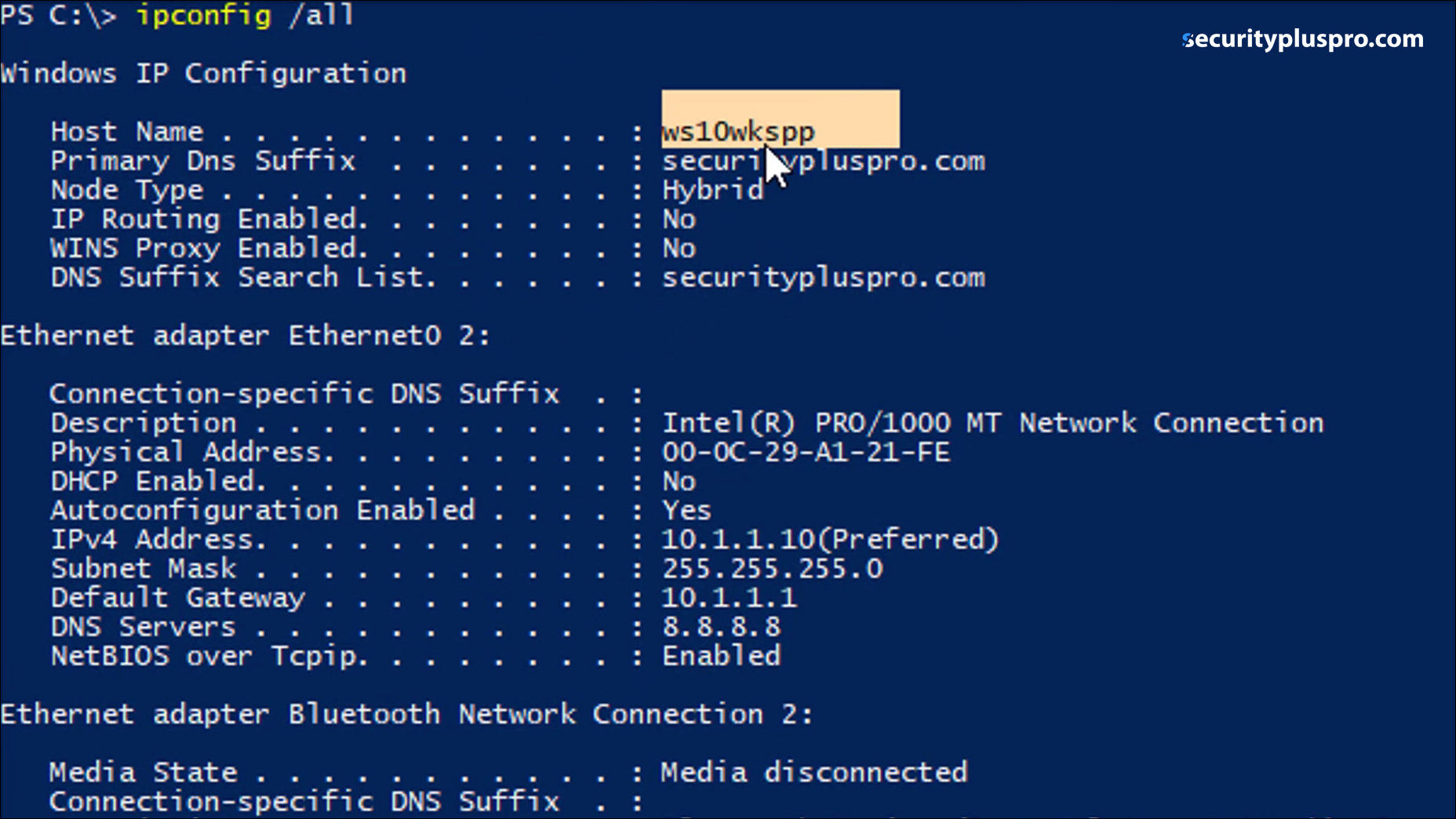 If we want to see all the DNS answers that have been cached on the client (meaning, my local machine at 10.1.1.10) I can type:

To flush everything from the cache I can type:

Sometimes you'll want to do that if you're having problems browsing websites but other network aware applications work such as ping.  For example, if you can't visit securitypluspro.com but you can ping 8.8.8.8 then you most likely have a DNS issue.  The name isn't being resolved to an IP address and that might be because the DNS cache contains an invalid entry.

Getting nasty with netstat

Anyway, if we just type netstat by itself we'll see all the connections to and from our localhost. 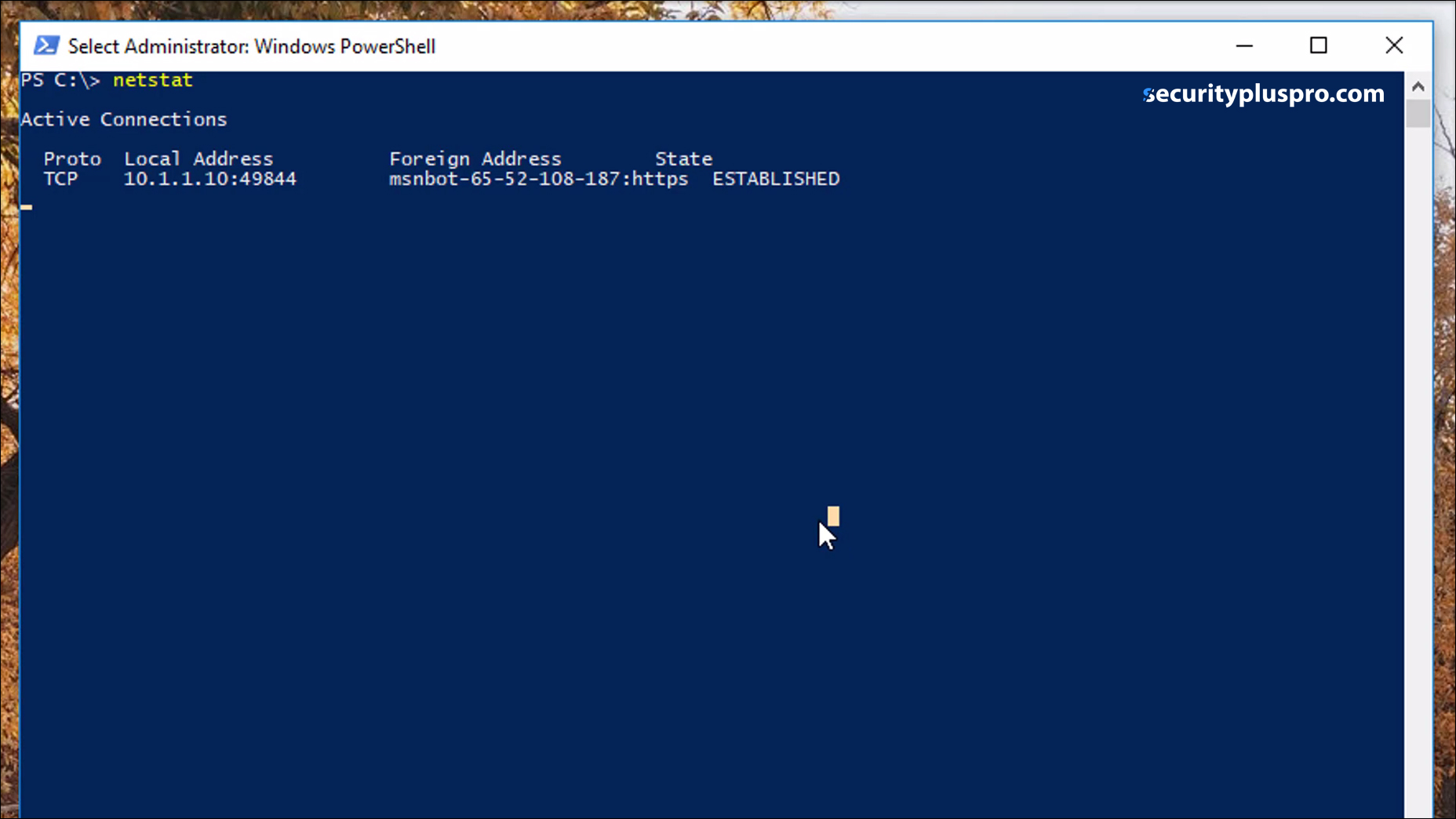 I like to filter netstat to only show me the most important information.

By using the -anob flag I'm telling netstat to:

This is the pimped way to use netstat.

As an extra tough I pipe the output through the findstr command so I can only display "ESTABLISHED" connections.  These are the most interesting (and possibly worrisome). 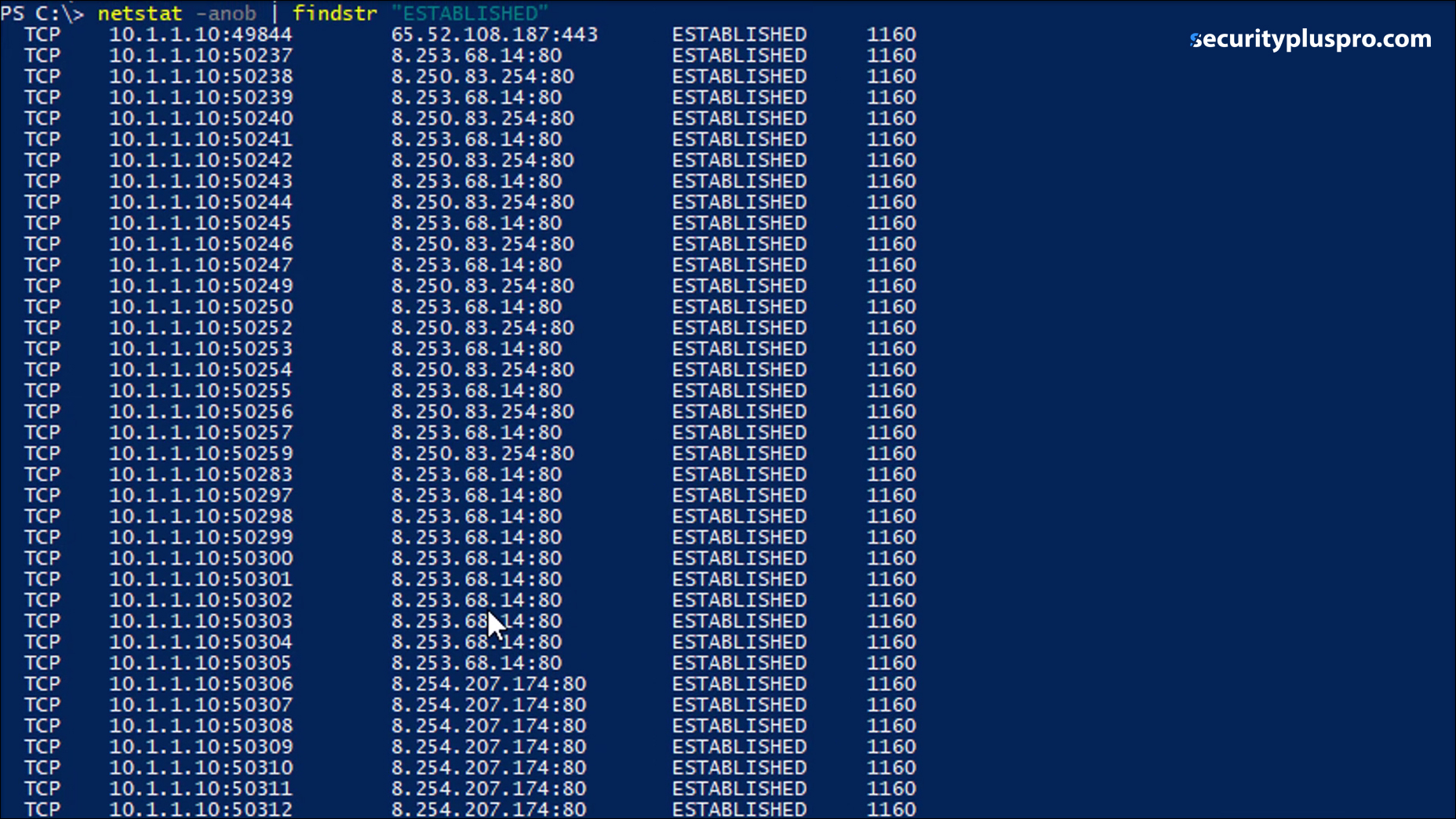 You can see I've got a ton of connections here!

The first column shows the protocol, TCP is being used.

The next column shows the source IP and port.  10.1.1.10 is my source IP and that 49844 port number, in fact, all those 50,000 ish numbers after the IP are the ephemeral source ports.  These are numbers the operating system generated on demand so the connected resource knows how to send data back to my machine.

The next column shows the destination IP and port. I'm seeing a lot of stuff like this:

So this means I have an established connection to some sever at 8.253.68.14 over port 80 (which is the default port for HTTP, so it's probably a web browser - but doesn't have to be - it could be malware using port 80 as a communication channel so don't make assumptions so quickly!)

Then that last column shows the process ID: 1160.

To see the actually application mapped to that process ID I could type this:

Shhh... that's a secret not a lot of geeks know about.  Keep that one in your backpocket bro.

And one more thing: to get a full list of all the netstat options use the /? switch: 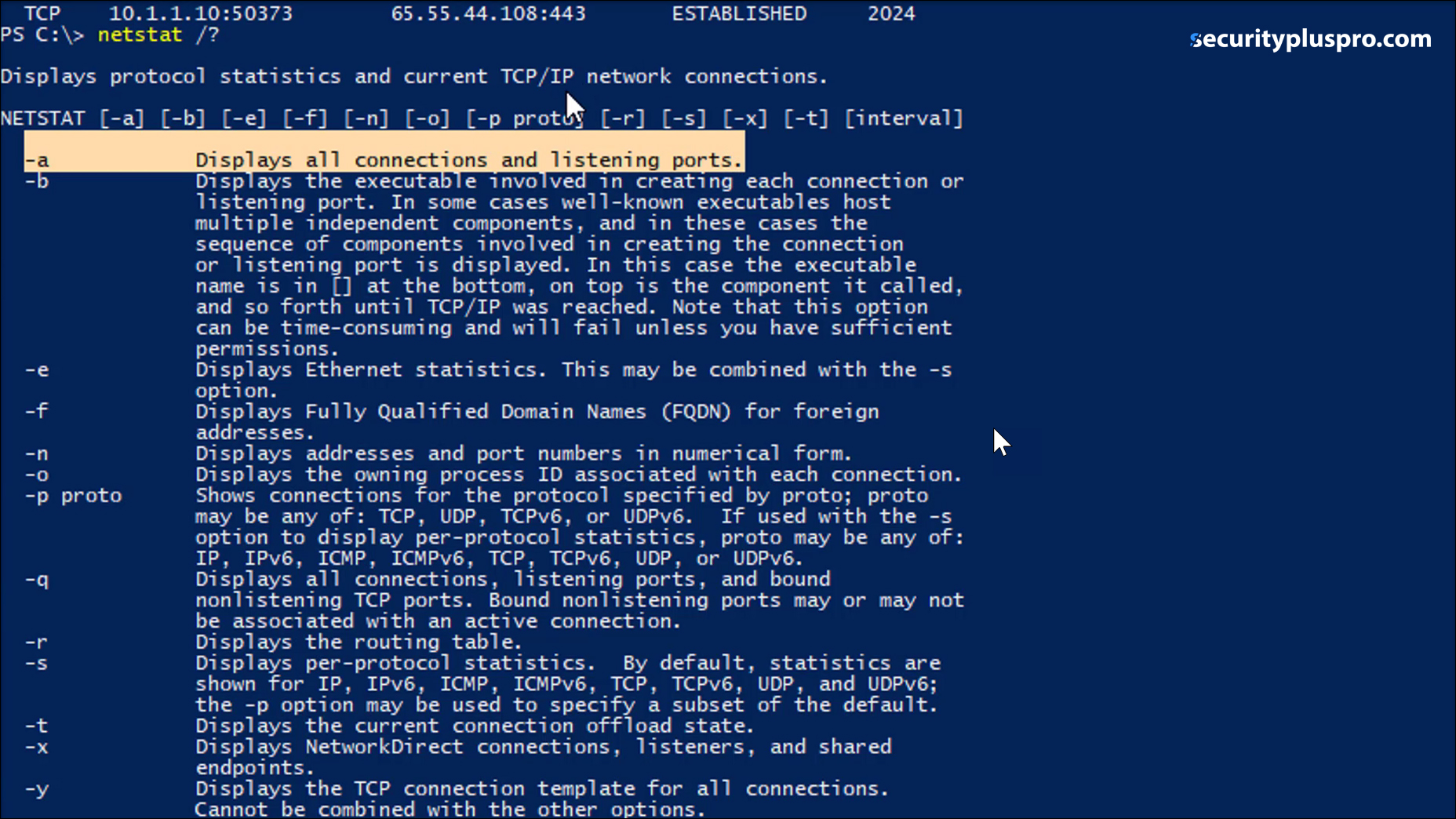 The last command we'll go over is tracert.

This shows you all the humble routers between your computer and host you want to trace a connection to.

For example, we can trace the route to google.com like so:

And it just keeps hopping along like a cute little packet bunny until it gets to the final destination.

If you see a * on some hops that's probably because you hit a firewall that's not responding to ICMP messages.

We'll talk about all that jazz in a future training lesson.

Oh and one more thing: you can also use pathping to do the same thing as tracert.  It's a more modern alternative to tracert that actually combines ping and tracert to produce results that neither tool provides on its own.

Use pathping /? to get more details there.

Alright, so that's all I have for your today.  As always you can watch a step-by-step video training on everything we covered on the SecurityPlusPro Youtube channel.  Check out the video below:

Next week you'll learn about the top Linux commands you need to know for the CompTIA Security+ exam.  It's going to be a lot of fun!

And if you enjoyed this  video don't forget to take the next step and join our mailing list.  You'll get more freebies, more downloads, more awesome stuff sent directly to your inbox so you can pass the exam.

See ya next week!